Canvas Health is hiring in all areas! Please View Our Current Career Openings! 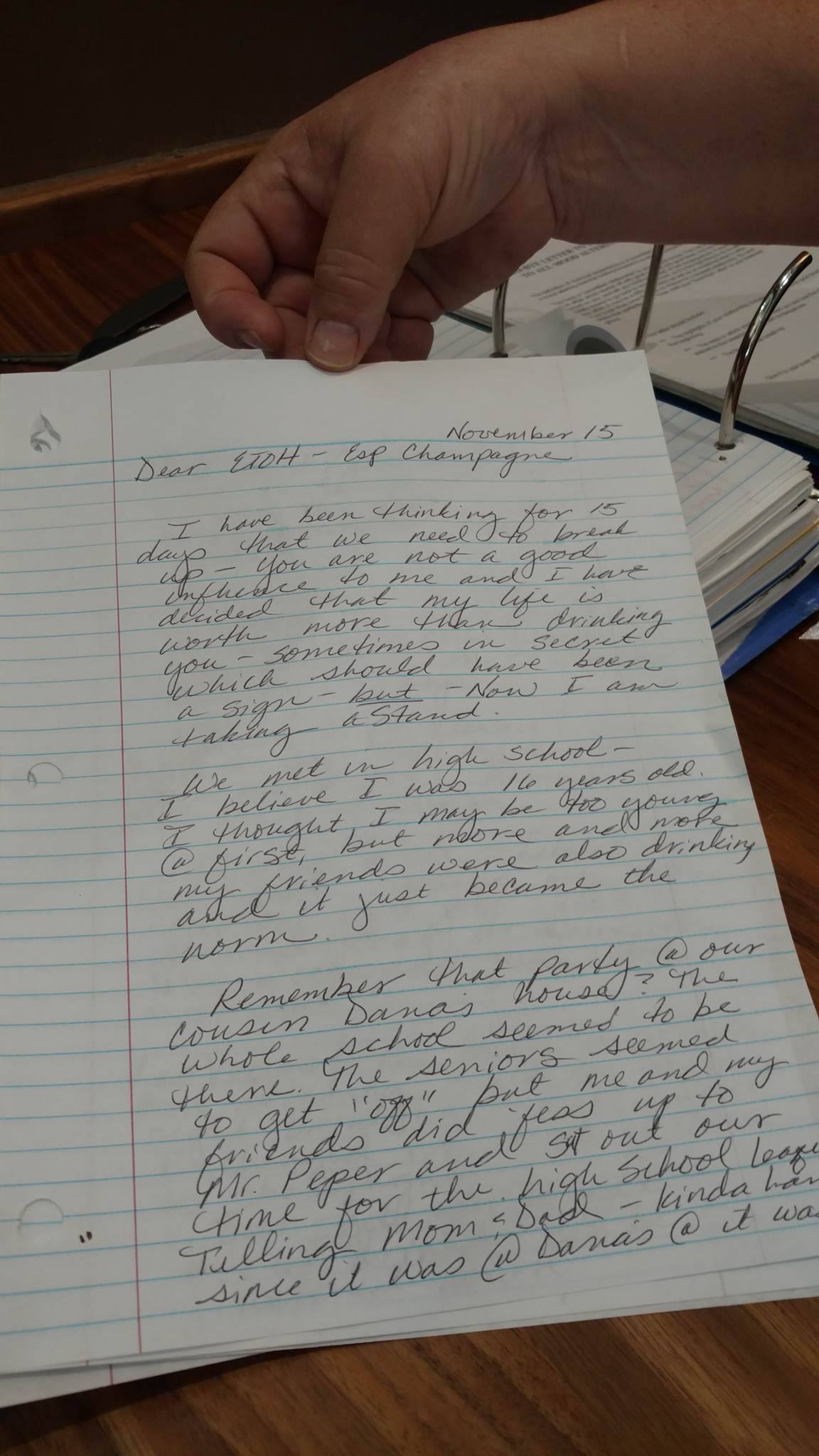 A Nurse Breaks Up With Alcohol

In making her first phone call to Canvas Health, Katy Steigauf, a nurse, finally decided to give herself the same care and attention she’d always given to her patients. 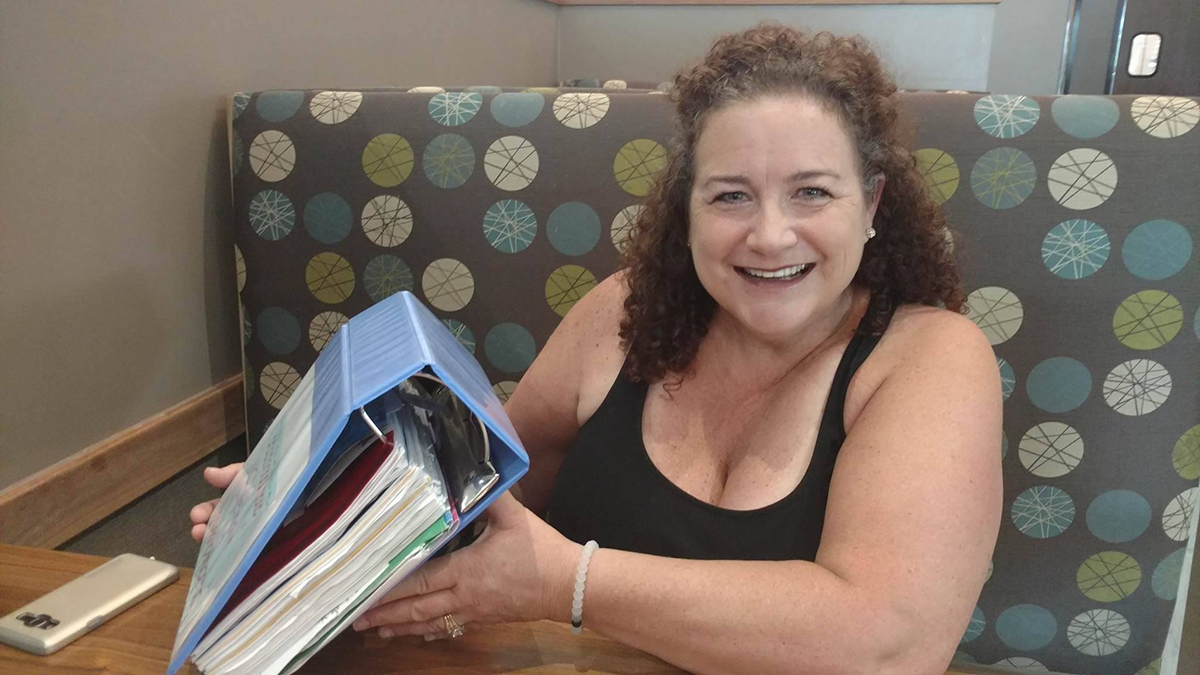 “You are not a good influence on me, and I have decided that my life is worth more than drinking you.”—Canvas Health client Katy Steigauf in a breakup letter to alcohol

Katy Steigauf sits down at the café and orders a carafe of coffee. She’s a night nurse, and caffeine provides that little extra fuel to help her keep going.

As recently as last year, she thought alcohol served a similarly useful function. It helped her blow off steam after a long day at work. It had helped her numb the pain of her dad’s cancer and his death, as well as the everyday stress of raising three kids. And besides, drinking helped her connect with people.

“Alcohol was great for coping with every emotion, whether I was happy, sad, or mad. I could make a justification out of everything,” says Steigauf.

Champagne, especially, did the trick. “I always liked champagne because it’s fun, you could go out and have it with your friends. If they served you a mixed drink, it might be watered down, but champagne always was what it was,” says Steigauf, sipping her coffee. “You opened the bottle, and that’s exactly what you got.”

But by 2016, Steigauf was beginning to worry about her relationship with alcohol. “I would go out to the garage away from my kids and sneak a drink directly from the bottle because that’s how classy I am,” says Steigauf. “I would think to myself, ‘Am I an alcoholic?’”

Things came to a head last October. “Oct. 4 was a Tuesday, so you know, it was Taco Tuesday. And not only was it Taco Tuesday, it was also National Taco Day, so of course, I was drinking,” shrugs Steigauf and laughs.

Normally, Steigauf went on shift at 11 p.m., but she’d forgotten she’d agreed to pick up a few hours for a coworker. She was expected at 7 p.m. instead of 11—not enough time for the effects of the alcohol to wear off. “I thought I could wing it,” remembers Steigauf. “As it turned out, I obviously couldn’t. I shouldn’t have been drinking.”

Steigauf’s boss suspected she was under the influence and asked her to take a sobriety test. Steigauf failed it. “I should have known better,” says Steigauf, who still feels the shame of that day. “I carry the insurance for my family. I had put them at risk.”

Steigauf was put on medical leave. The next day, she found it hard to get out of bed. “I felt like a failure,” says Steigauf. “I felt embarrassed. I felt despair. I wondered, ‘What am I going to do now?’”

On the second day, however, she made the call to Minnesota’s Health Professional Service Program (HPSP). The HPSP, a nursing governance body, mandated 300 hours of intensive substance treatment for Steigauf before she could potentially come back to work.

Steigauf decided that this was it—she would commit herself to quit drinking. She chose Canvas Health because of its proximity to home and its track record of helping people get sober. For nearly 50 years, Canvas Health has provided services to people struggling with substance use, mental illness, crisis, unstable housing, and trauma.

At Canvas Health, Steigauf immediately felt at ease. “The intake person was very understanding and really took the time with me,” says Steigauf. “She told me, ‘This is an illness. Don’t be ashamed of it.’”

Steigauf began having one-on-one sessions with Bob Jones, her Canvas Health counselor, in addition to group meetings. Canvas Health uses a cognitive behavioral approach to treating substance use disorders, asking clients to replace the unhealthy thinking that underlies the drinking with healthier thoughts.

As a nurse, Steigauf had written meticulous notes on her patients, and she approached the work of her sobriety with the same thoroughness.

“Bob started me with a planner from day one,” says Katy, patting the thick notebook beside her. “The purpose is to make us more mindful of how we use our time. First he asked me to document what actually happens in a day. Then he started giving me assignments.”

“I would take notes from each meeting and put it in the binder,” says Steigauf, turning to a page in her notebook. “Here’s a quote from the first night: ‘Many of life’s failures are people who didn’t realize how close they were to success when they gave up.’”

Steigauf and her husband decided to be completely honest with her kids about her drinking and the need to get sober. “The hush thing was what had obviously gotten me into trouble in the first place,” says Steigauf. “I wanted them to feel like they could talk about it openly with me or with their friends.”

Her daughter Abby had been reluctant to attend a family therapy meeting—but she wound up attending all five.

“We have a closer bond now,” says Abby.

Steigauf completed treatment successfully in March, but she still checks in with Jones and attends two support meetings a week. She’s back at work and doing well.

You could say that Steigauf’s life has gone back to normal, but that’s not true—her life is better than before, and it goes deeper than simply not drinking. Through and through, Steigauf feels healed.

To schedule an appointment with a Substance Use Counselor at Canvas Health, or to make a referral, please contact us at 651-777-5222.

Stay in the loop

Sign up for our newsletter and get the latest news about Canvas Health.